The Asics Novablast 2 is a very good running shoe with a rocker for smooth and comfortable daily runs.

The Asics Novablast 2 is a very good daily trainer. It builds on the good base of the Asics Novablast 1 and fine-tuned it to improve its surprisingly fun, soft, and bouncy configuration (especially in comparison to other traditional Asics running shoes).

The Asics Novablast 2 is a little heavier than the previous model but also more stable. The FF Blast foam delivers a very good, lively ride with a lot of ease and fluidity while the AHARPLUS outsole makes the shoe durable.

It has a medium stack height (30 mm under the heel) and moderate heel-to-toe drop of 8 mm, which is more versatile than the 10 mm of the previous version. Heavier than the Novablast 1, the Asics Novablast 2 remains in the sub-9.9 oz/280 g category, which is reasonable for daily running.

Their grip is good on the road and easy dry dirt trails but proves more tricky on wet surfaces. The soft ride of the shoe feels great, especially at intermediate paces, where this model shows its full potential.

In the opinion of many runners, it's a comfortable and reliable trainer for everyday use as a beginner or experienced runner that also works well for recovery days. However, its narrow platform doesn't make it an ideal choice for runners with overpronation. 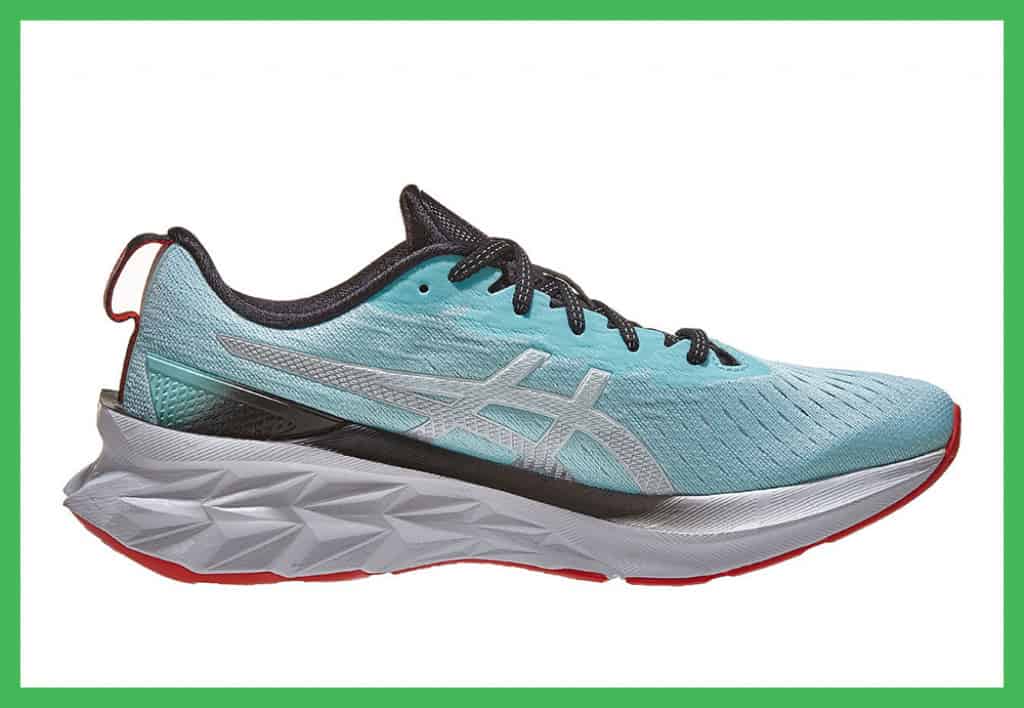 Seth James DeMoor, the winner of the Pikes Peak Marathon in the United States, is a huge fan of the Asics Novablast 2. He already liked the original Novablast, which he used to train in regularly, and he decided on the second version of the shoe, the Asics Novablast 2, to continue his training and even compete.

Its stylish design and versatility quickly convinced him that this trainer was the one for him. Is he right to praise this shoe? Let’s review the different tests we have and see if this running shoe deserves its reputation. 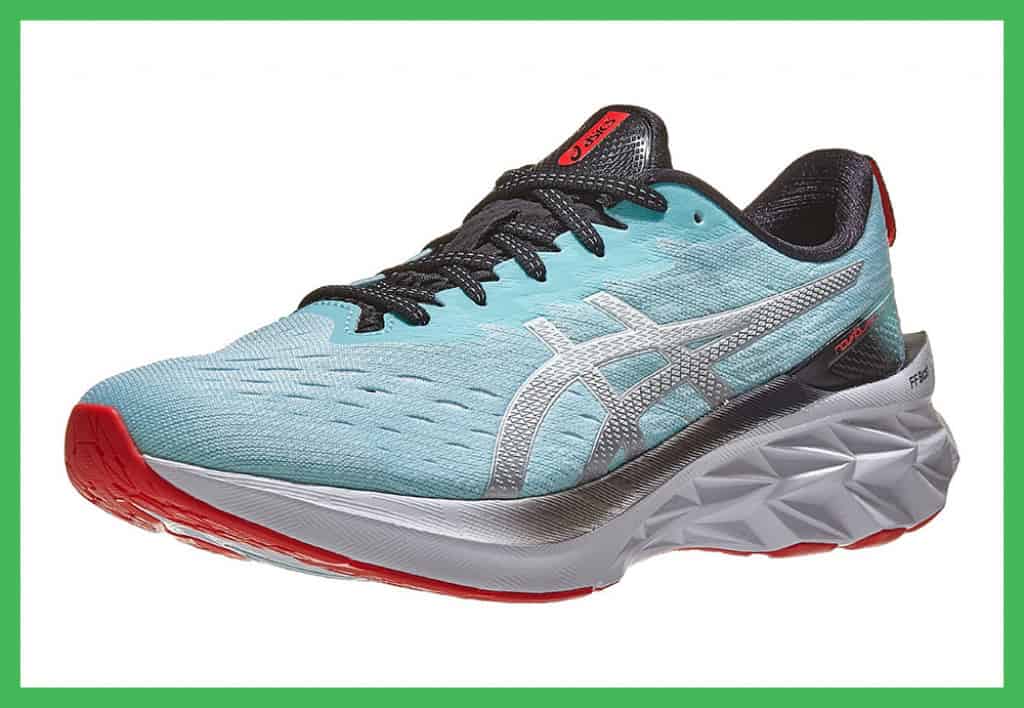 The Asics Novablast 2 running shoes are the second model of the brand to be equipped with the Flytefoam Blast. This technology was used on the Asics Novablast 1 and revolutionized the Asics cushioning, usually relatively firm. It’s also found on the excellent carbon-fiber plated Asics MetaSpeed Sky.

With the inclusion of this soft midsole cushioning foam, the shoe offers excellent shock absorption and better bounce during the run. The underfoot feel is softer than with the first edition, which offered a fairly firm cushioning. The ride is significantly improved, whether for short or long distances and at any pace. According to many testers, this foam shows its full potential during training sessions at moderate to faster paces.

This shoe provides comfortable and smooth cushioning. The shoe’s heel-to-toe drop is lower than the previous model, contributing to a more stable ride. It was 10 mm on the first iteration, and it’s now 8 mm on the Asics Novablast 2.

Also, despite its somewhat bulky look, the stack is not that massive, with 30 mm under the heel.

Additionally, there’s more cushion under the forefoot to absorb shocks better. It also helps to increase stability and provide a more plushy feel, although the toe-off is less snappy as a result. 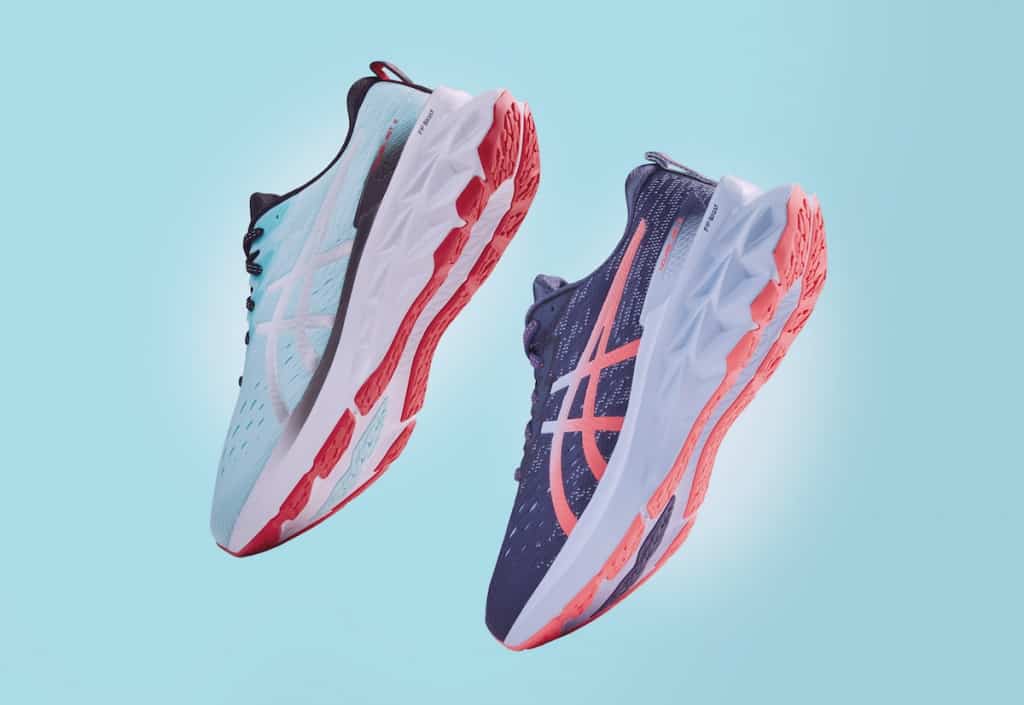 Most testers, even those who didn’t like the Novablast 1, find the Novablast 2 a good shoe for daily running. It cushions shocks effectively, and the shoe is responsive with good energy return.

Even if it’s a little heavier than the first version, the Novablast 2 still delivers a smooth and cushioned ride. However, some runners notice that the weight is not necessarily well distributed, with the heel being a bit heavier.

The Novablast 2 features a rocker to propel the runner forward with a trampoline effect. Ultimately, it’s a very personal thing. While most runners enjoyed it to ease their daily workouts, some runners found it unpleasant and reported that it was detrimental to the ground feel.

The Novablast 2 is a versatile shoe and can quickly become the go-to shoe in any daily run rotation. It’s suitable for short, medium, and long distances. Also, its comfortable cushioning makes it an exciting option for recovery runs at slower paces when the legs are tired. Even if it’s less of an agile and fun shoe than the original (the rocker is milder), it remains a good choice for split training, even if it’s not its primary objective. Essentially, the N2 is best for comfortable long cruises with a kick. 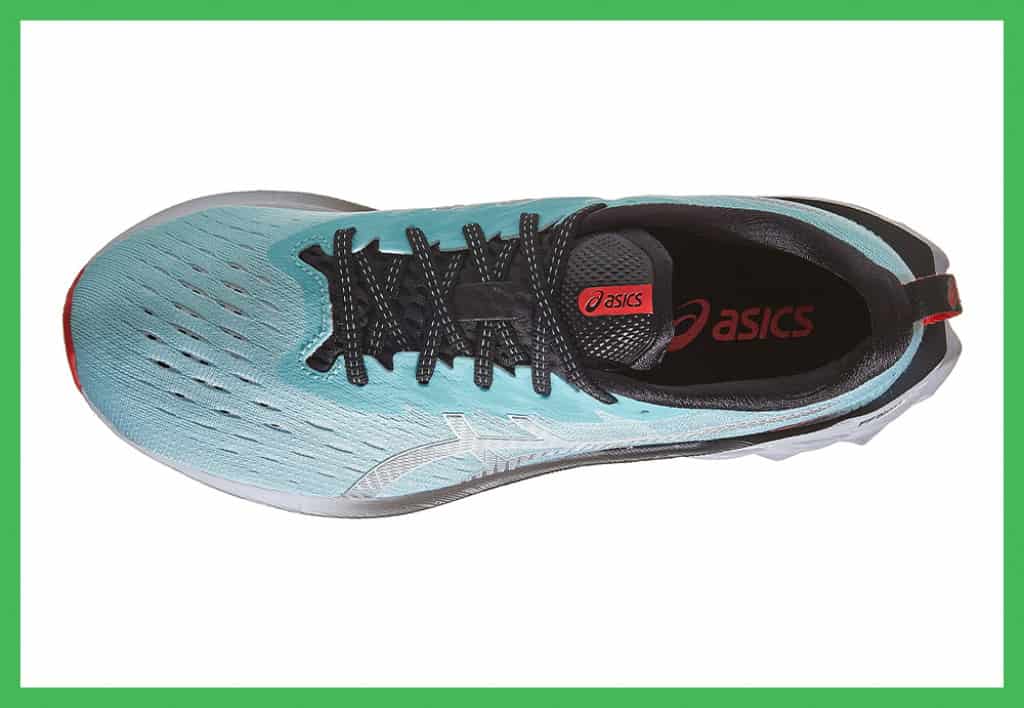 Just a quick look at the many reviews is enough to make one thing clear: the upper was the weakest point of the first Novablast. The Novablast 2 does much better on this front. Asics revised the mesh upper: less loose for a snugger fit and combined with a wider platform and the higher walls on the lateral and medial sides; it offers more stability and comfort.

In the heel, the new TPU heel counter provides a better foot lockdown and contributes to the shoe’s stability. Runners note that the heel cup is almost more sturdy than on the original Novablast.

The Novablast 2 upper uses a double jacquard mesh upper that provides excellent foothold and breathability. The gusseted tongue is practical and easy to adjust. Overall, the shoe fits true to size and should even be suitable for runners with wider feet (of course, it’s still better to try it in-store if you can). 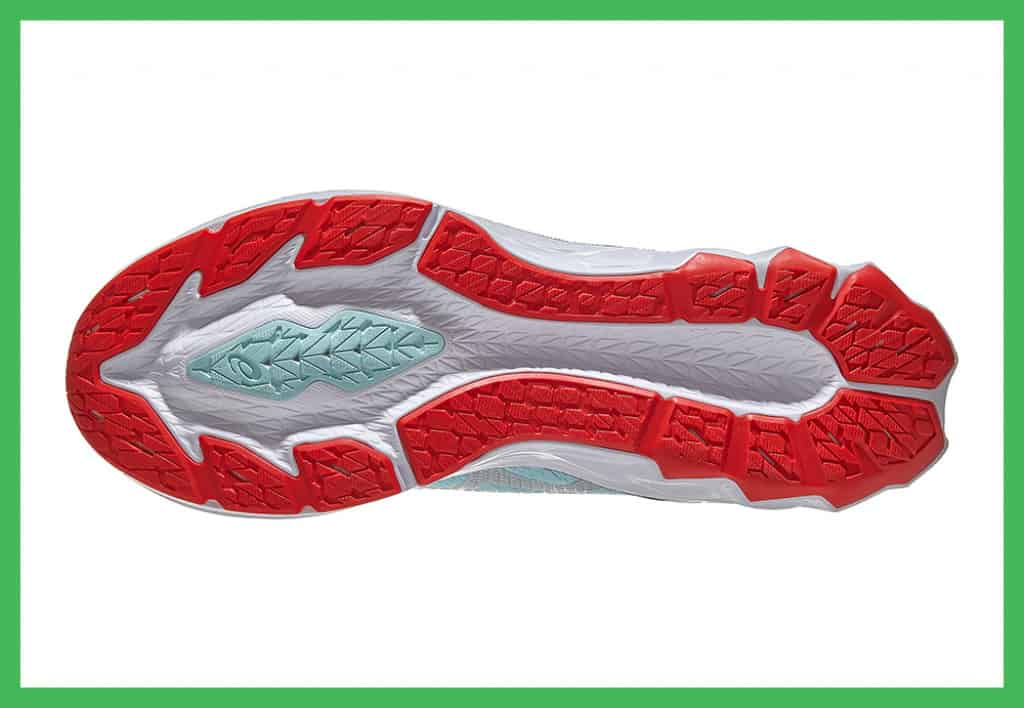 The sturdy rubber AHAR+ is still here to protect the most wear-prone areas. You can run long distances without any worry that the tread will fall apart. Testers didn’t see any noticeable wear even after a few long sessions. Are you entering marathon preparation? You can be confident that it can take the beating.

However, the grip is, according to some reviews, questionable. The outsole design of this shoe is not textured, which can be a problem on wet dirt roads and pavements. 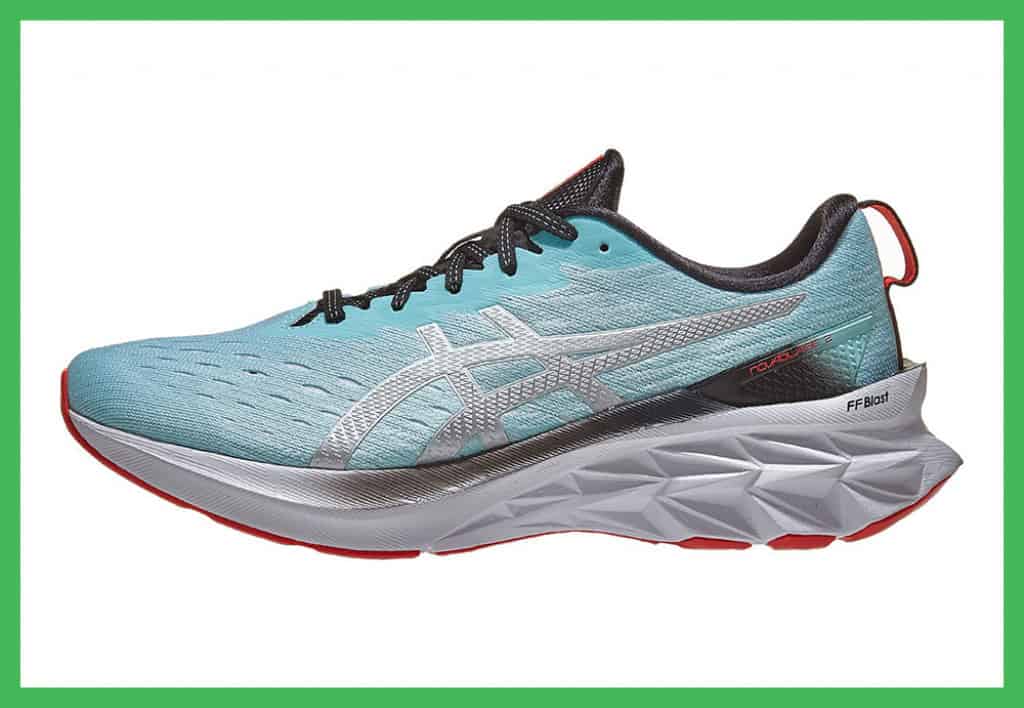 The Asics Novablast 2 is a clear upgrade from the first version, even though it gains weight. It keeps the winning points and corrects the problems that surfaced, especially the upper fit.

Comfortable, with soft and balanced cushioning, good shock absorption, and an innovative midsole geometry, the Novablast 2 is aimed at beginners and experienced runners.

It’s a good, responsive daily trainer that can handle many training scenarios. However, its platform is still narrow, which can be a problem for overpronators, even if the stability is better than the first version.

As for runners with a need for speed, they should find this shoe an enjoyable option even though its weight prevents it from being a real competition model.

Last but not least, the Novablast 2 is quite affordable (especially for its premium quality) with a base price of $130.

Since 2017, we have analyzed hundreds of running shoes and every month thousands of runners trust us to find the perfect pair! Discover our selection of the best 2021 road running shoes.

Where to buy it?

Besides your local running store, here are some trusted online retailers where you can find the Asics Novablast 2:

How's the fit of Novablast 2?

Answer: This shoe runs true to size. You can choose the size you normally pick (no need for a half size more).

Kevin is the founder and editor of Runner’s Lab. He started running in 2015 and completed his first marathon in Rotterdam in 2016. He’s also worked for Under Armour from 2016 to 2018 and helped launch their running collection in Europe (in particular the HOVR shoes). In addition, Kevin is a 300-hour certified yoga teacher (Sivananda) and uses this experience to run more mindfully with a focus on well-being over performance.