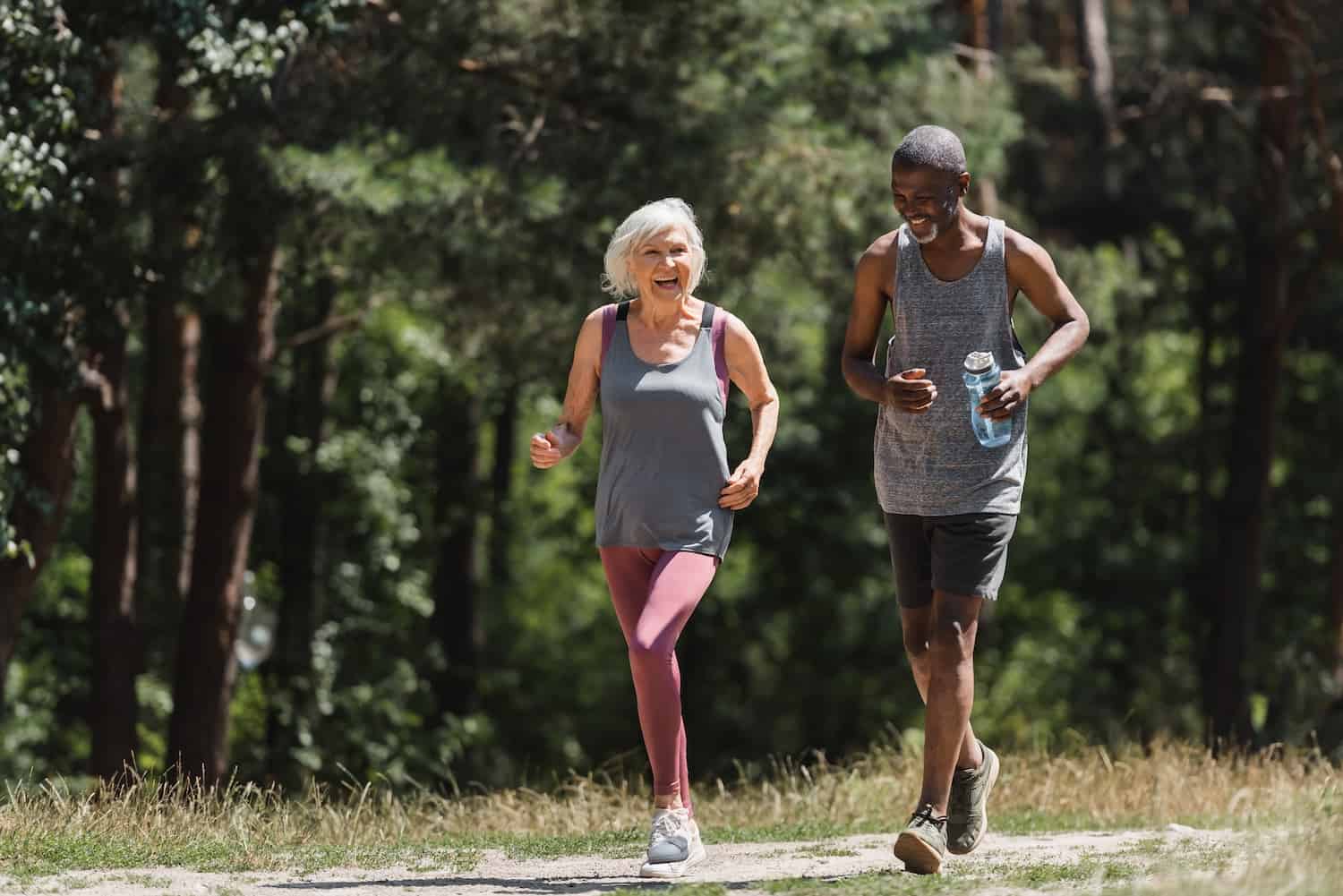 How to Start Running in your 50s (and Beyond)

Sound like torture? It actually may just describe your first few times running. But don’t sweat it (no pun intended)! If your goal is to get fit or start a new exercise regime, all it takes is a little dedication to up your current fitness level.

If you are approaching middle age or are already in the neighborhood of age 50, new challenges like improving your physical fitness can help you stay young. Developing a training routine with realistic goals can help you feel more like your younger self.

If you are considering starting a running routine, we’ve got good news! Today, we’re talking all about how to start running at 50. Grab your running shoes, and let’s get started!

Research conducted by Stanford University shows that elderly runners have fewer health issues and disabilities than those who are not physically active. They are also more likely to have a longer lifespan and half as likely as non-runners in the same age group to die early.

However, everyone is unique. Before starting to run, it’s very important that you talk to your doctor. They will run a few checks to make sure you don’t have any contraindication for running. Now that we have this out of the way, let’s dive into the important recommendations to start running at 50.

With this information in mind, older runners can have peace of mind when creating a training plan. Some middle-aged or senior citizens worry that running could result in knee injuries or other accidents; however, it’s more beneficial than not.

That said, older athletes must develop a running plan that accounts for their fitness level. Doing so will help you to avoid injury better. Some sound advice for building out a running regimen is to start slow. Walking or power walking is a great way to ease into any high-impact sport, including running. Over time, you will be able to find your own pace for an optimal running experience.

It’s also a good idea to perform dynamic stretches before and after running. Keeping the limbs and joints flexible and warm can significantly help prevent injury.

The importance of cross-training

Strength training is also highly recommended for runners since a strong core or glutes (for example) can support the rest of the body. Strong muscles and joints are crucial to avoiding injury and getting the most out of a running program. Squats, lunges, and yoga or Pilates are excellent stretching and strength training workouts to promote flexibility and strength.

Don’t cheap out on good shoes

Another non-negotiable for anyone about to begin running is good running shoes — preferably a pair that takes natural foot shape into account. Typically, a local running store will carry an array of popular options for different foot types. For instance, someone with flat feet will want a midsole with ample cushioning and support.

Finally, new runners should decide how many days a week will be best for their unique running program. You should factor in rest days and recovery time. Most training plans recommend that runners start with up to half an hour, 2-3 times per week. It’s also in line with the scientific literature on optimal running for the best health benefits. The amount of running time, and speed, should increase slowly over several weeks. On rest days, runners may find walking to be effective for staying loose and getting the blood pumping.

Benefits of Running for Older Runners

Don’t believe for one second that as an older runner, you have little to gain. The opposite is true!

While it may feel to those aged 50+ that they’re late to the game, there are many physical benefits to be gleaned from running. Studies show that seniors who run several days a week exert the same energy as the average 20-year-old does when walking. Further research shows that older people who run regularly can walk faster than their peers who only walk for exercise.

When it comes specifically to cardiovascular health, running is a true weapon for the heart. Since running pumps more blood to the brain, it allows blood vessels to relax. Consequently, it helps stave off high blood pressure!

Even more, those with atherosclerosis can benefit significantly from lifestyle changes, most notably adding aerobic exercise such as running into their routine. Studies have concluded that middle-aged runners can reduce or even completely reverse their risk of heart failure with exercise. However, doing so does take dedication — specifically, two years’ worth of training, at least 4-5 times per week.

In moderate amounts, running is ultimately a highly healthy aerobic activity that protects the heart and maintains a healthy body.

But running promotes more than just physical benefits — it encourages brain health and boosts the mood. This is due to endorphins and serotonin released in the body during physical activity, which are anti-stress hormones. Over the short term, running can encourage feelings of calmness and lower anxiety. In the long run, it can even have a continuous impact on depression and improve self-esteem.

There are many emotional and physical benefits to be gained by running, some of which are life-changing.

Risks of Running After Age 50

Along with the benefits, there are some risks associated with running at an older age. However, we’ll say upfront that most of these risks can be avoided and are not specific to older people.

Research shows that approximately one-third of all joggers experience a musculoskeletal injury in a year. Common risks in middle age include fractured bones, cardiac issues, deteriorating muscle, and blood sugar issues. However, these are avoidable if runners listen to their bodies and are not exclusive to senior athletes. If dizziness or side effects occur for runners of any age, it’s important to take walking breaks and time off to recover.

One particular risk for seniors who run is failing senses, such as eyesight and hearing. This makes older athletes more vulnerable to accidents, some of which could be fatal. Before taking up running, seniors with poor sight or hearing should take proper precautions. Contacts or hearing aids can make all the difference in ensuring a safe and effective ride.

In general, older runners are not inherently less capable or frailer than in their younger years. As is necessary at any age, proper nutrition and healthy eating habits support strong (and safe) performance. Cross-training is also a good idea to work various muscle groups and build more stamina. This also gives runners a chance to take a break and try something different from their routine.

In 2019, Gil Jordan (aged 74) ran the Marine Corps Marathon. Decades prior, however, he began with a light walking and jogging routine that lasted for about a quarter of a mile. When asked how he transitioned from this non-strenuous regimen to running a half marathon and marathon distances, his response indicated how important it is to be (and stay) motivated.

Jordan never thought much about running marathons. Initially, he believed that those who ran marathons were “crazy.” Still, when watching personal-interest stories on TV on the New York City Marathon and Ironman, Jordan was intrigued. In each of the stories, many runners who crossed the finish line seemed visibly satisfied with their accomplishments.

This was the catalyst for Jordan lacing up as a serious runner. He ran his first marathon at 48 years old. Today, at age 74, he averages 1,800 miles per year.

The Georgia native is a gold medalist, mother of six, grandmother of 14, and great-grandmother of 4. Harrison’s life is not only shocking for her age but a true inspiration — particularly to senior athletes. In 2018, she won the Georgia Golden Olympics and has won many gold medals through the years.

The kicker? Harrison started training when she was 50 years old, proving to other runners that it’s never too late to start.

Harrison shows no signs of slowing down at her advanced age, logging about 11 miles per week and cross-training by lifting at her local fitness center. Her identical twin sadly has dementia, so Harrison is incredibly grateful for her mental and physical capabilities. She aims to be an inspiration to runners all over the world.

Irishman Tommy Hughes, aged 60, has defied the odds multiple times in his life. Running is one of his great passions and has even been a lifesaver to him.

A former alcoholic, Hughes got into running after sinking to the lowest point of his life, where drinking drove him to the brink of death. He admits that without running, he probably wouldn’t be around to tell his story.

Battling both his addiction and a period in which he was overweight, Hughes began to train, running in marathons in his early 20s. Forty years later, he’s still at it, setting the over-60 marathon world record in the Lisburn Festival of Running. His time? 1:11:09 — an average of 5:26 a mile.

“Without running, I could’ve been six feet under…it kept me on this planet,” Hughes said. Today, he is an Olympian, a father of four, and an electrician.

Running at Night: Why Do It and How to Stay Safe [9 tips]

Run Slower to Become Faster: Why It Works and How to Start

Kevin is the founder and editor of Runner's Lab. He started running in 2015 and completed his first marathon in Rotterdam in 2016. He's also worked for Under Armour from 2016 to 2018 and helped launch their running collection in Europe (in particular the HOVR shoes). In addition, Kevin is a 300-hour certified yoga teacher (Sivananda) and uses this experience to run more mindfully with a focus on well-being over performance.

How to Start Running… And Enjoy It! (9 Tips for Beginners)

Run Slower to Become Faster: Why It Works and How to Start

Running at Night: Why Do It and How to Stay Safe [9 tips]

The Most Iconic Trail Races in the United States

What do you think? Let us know in the comments!