roadrunnersports.com
Buy at the lowest price
Not in the US? See more offers:

Adidas Adizero Boston 9
Check this offer
8.9Overall score
Very good lightweight and versatile road running shoe
A continuation of the beloved Boston series, the Adidas Adizero Boston 9 is a versatile daily trainer that can handle a fast pace. Based on feedback from testers, the 9 is one of those "all-around" running shoes that will come in suitable for nearly any type of training. The Boston 9 midsole uniquely combines Lightstrike and BOOST foams. However, quite a few runners voiced their dissatisfaction with this addition of Lightstrike, preferring the Boston line's previous midsoles designed with only BOOST padding. Nonetheless, even with the addition of Lightstrike, runners appreciated overall the responsiveness of the cushioning. They felt it was well suited for speed training. Then, runners unanimously described the upper as an improvement from former models, with enhanced breathability from its lightweight mesh material. The traction of the outsole was also described as a plus of the Boston 9. It features Continental rubber for a better grip on wet or slippery roads. Runners listed a few downsides of the Boston 9. First, the medium-high arch doesn't accommodate every foot shape. Second, the unusually-large design forces users to size down. The shoe's true white also reflects dirt and scuffs very quickly. Overall, the Boston 9 received high marks across the board as a great option for running 10k races and half-marathons, as the lightweight design of the shoe encourages quick turnover and fast paces. It's also praised for its durability, versatility, and even its affordable price. Given the fact that one of the only major downsides of the Boston 9 is its Lightstrike addition, we rank this shoe as a 9.3, making it a very very good option for hardcore athletes and casual runners alike!
Comfort
9.5
Durability
9
Value for money
9.5
Design
9
PROS
CONS

Is the Adidas Adizero Boston 9 true to size?

This road shoe uses a regular sizing chart. However, runners who have tried it notice that it fits rather big and that they had to choose a size below their usual size. It’s one of those shoes that is best to try in-store to avoid surprises.

Is the Adizero Boston 9 suitable for runners who overpronate?

This shoe is a neutral running shoe. Thus, it is designed to adapt to all users regardless of their type of pronation. It doesn’t feature any particular correction to avoid supination or excessive pronation. In any case, it should be noted that stability shoes for overpronation are no more effective than universal shoes in limiting the risk of injury. We, therefore, recommend that you select your shoes according to their comfort, the most important criterion. In other words, you can use this model even if you overpronate, as long as it is comfortable.

Is this road model suitable for heavy athletes (85 kg/187 lbs or more)?

Only one study to date has observed the relationship between the stack height, risk of injury, and weight. According to the results of this study, minimalist footwear can increase the risk of injury for athletes weighing more than 71 kg (157 lbs). The Adizero Boston 9 has a moderately thick sole so it should be suitable for most runners regardless of their weight.

Is it possible to run a marathon with these shoes?

This Adidas road shoe is suitable for different types of training and distances. You can wear it during your daily sessions, of all types. As far as the marathon is concerned, it depends above all on your preferences. If you find this shoe comfortable for your long runs, then it should be a good choice for your race. 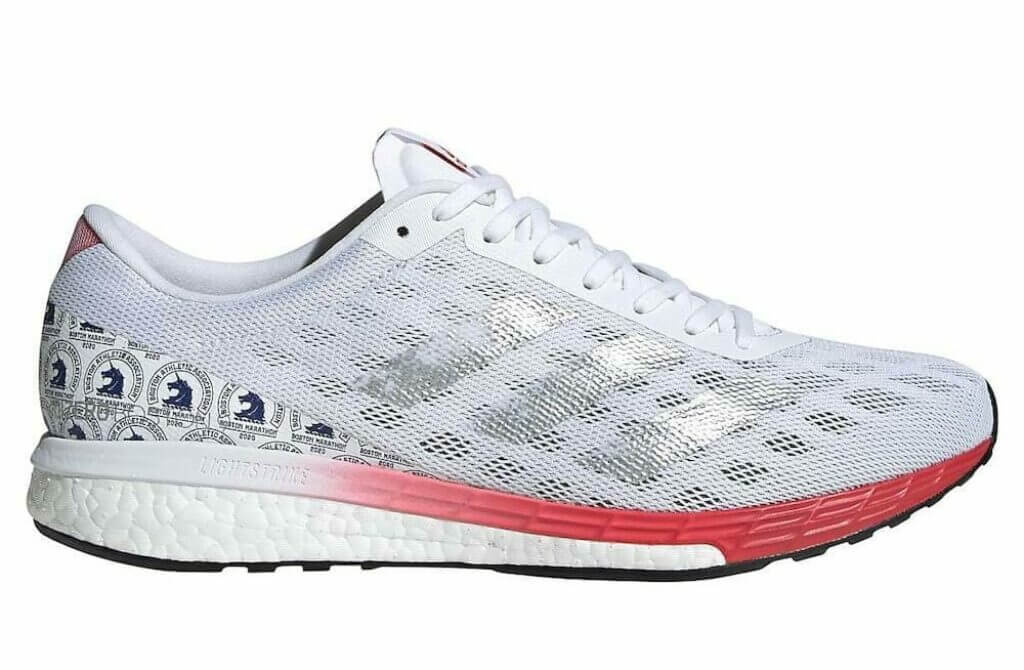